Looking at the list of titles held by Jon, this begins to build a picture of how influential he was within the town – being a part of the Town Council from its inception in 1999 and continuing to be a part of this, on a voluntary basis, for a further 12 years! 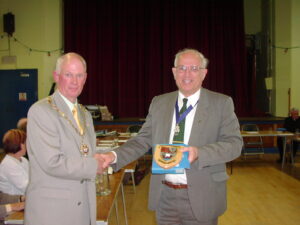 As a councillor, Jon was involved in the Town Council delivering many amazing projects and initiatives for the town. As a Mayor [pictured right upon being elected as Mayor and presented with the mayoral chain by Past Mayor and Freeman of the Town, Laurie Holland] and Leader of the Town Council, there were many times in which he was leading this change, through good times and more challenging, but always with one aim – for the betterment of the town, for the people of Seaford. Jon had a particular passion for representing people, ensuring their voices and needs were being heard and met, and that the Town Council was doing that within its power to really make a difference.

The Town Council sends it condolences to Jon’s family and those who knew him so well. Despite having hung up his town councillor hat in 2011, Jon was still heavily involved in many groups and projects – he will be sorely missed by the town.

Speaking about working alongside him, current Town Councillor Linda Wallraven said ‘It came with much sadness to learn of Jon’s passing.  He had a wonderful character and it was a pleasure to have known and worked alongside him during my early days as a Councillor, up to when he left in 2011. 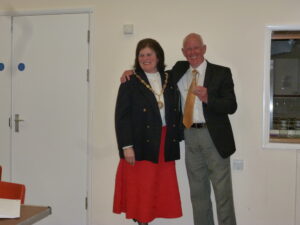 Jon worked hard for the council and the town and in recognition he was awarded the Mayor’s Award for his voluntary work [pictured right receiving his award from fellow Past Mayor Cllr Wallraven] .  Jon will be very much missed by all who knew him and my condolences go to his family’.

The serving Mayor of Seaford, Councillor Rodney Reed, said “As Mayor of Seaford and on behalf of our Town and the Seaford Town Council, I want to take this opportunity to recognise the public service of Mr Jon Freeman,  his  contribution to our community in a rich variety of ways during the course of many years in Civic life.  We pass on the  Council's and town's condolences to his wife Chrissie and to his wider family in their bereavement."

To borrow a quote from Jon himself whilst Mayor ‘we do not expect to find another like (him) – but we can all share in building on the wonderful work (he) started.  Thank you, (Jon) for everything!’

East Sussex Fire and Rescue's prompt action meant the fire was contained to a small area of bank, and public safety was ensured at all times.