Statement from Seaford Town Council to acknowledge the death of former Town Councillor and Leader of the Council, Ian White

The Town Council is deeply saddened to have learnt of the death of Ian White who served on Seaford Town Council for 8 years.

It was with immense sadness that Seaford Town Council learnt of the death of former Town Councillor and Leader of the Council, Ian White.

In addition to all that Ian dedicated to the Town Council, he also served concurrently as a Lewes District Councillor returning again in 2019, representing the voice of Seaford but with a particular passion for his local neighbourhood of Bishopstone.

Quote from former Mayor of Seaford, Cllr Linda Wallraven: “Ian was an excellent Cllr. and was very dedicated to the role.  Seaford was his priority, trying to work for the good of the town as a former Town Councillor and a sitting District Councillor.  One of his main goals was the completion of the clubhouse at Seaford Head Golf Course.  Ian was a sincere person and his expertise will be solely missed”.

The thoughts of all those at the Town Council are with his wife Jan, family and friends. 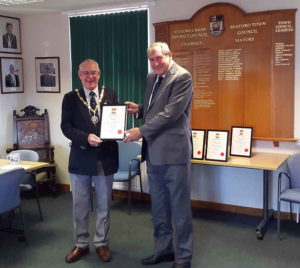