The Mayor of Seaford announces initiative to support all local charities!

The Mayor of Seaford announces initiative to support all local charities!

In these unprecedented times the Mayor of Seaford, Councillor Rodney Reed sets out how he would like to help to support local charities in Seaford and national charities which provide services directly in Seaford.

It is usual for a Mayor of Seaford to nominate one or two local charities to be the Mayoral Charities for their term in office.  As a Mayor’s chosen charity, any funds that are raised throughout the year are presented to the charity at the end of the Mayor’s term at the Town Forum.  Being nominated as a Mayor’s Charity is also a platform to significantly raise the profile and public awareness of the charity and has been known to have a long-lasting positive impact in helping to boost fundraising capabilities going forwards.

However, at the start of Cllr Reed’s term in office he felt that during these unprecedented times, all local charities are suffering and have had their incomes and fundraising abilities curtailed.  This is obviously impacting the capability of being able to deliver services in Seaford to the worthy causes they all support.

It is with this in mind that The Mayor is not choosing a single charity but is instead launching an initiative to give all local charities a platform to help boost public awareness of their causes and throughout the year highlight them on Seaford Town Council’s website and social media channels.  It is also hoped, when it is safe to do so and adhering Government Covid-19 guidance, that Mayor’s fundraising events might be hosted in which all local charities can participate and raise funds for themselves. This will be confirmed as and when it is possible to do so to help charities get back onto a secure financial footing.

“I spent several years working for a national children’s charity and for some years was one of the trustees of a national grant-making trust. So, I am aware that fundraising can be a competitive affair and that smaller local charities may be disadvantaged when facing larger charities employing professional fundraisers. As soon as ‘social distancing’ requirements are eased it is inevitable that local charities, voluntary organisations, and community groups will need to fund-raise in Seaford at almost the same time. My hope is to be able to give many groups an opportunity to ‘set out their stall’ on the Town Council’s website and our Facebook pages and to set up actual stalls to raise funds for themselves at a Mayor’s charity support event” Councillor Rodney Reed.

In the meantime, the Mayor is asking that all local charities or any regional or national charity that actively helps the Seaford community, that wish to be involved in the Mayor’s initiative, to make themselves known to the Town Council as soon as possible.

Please send in details of your charity, with permission to use the following information, to mayors.secretary@seafordtowncouncil.gov.uk

-1 or 2 photographs highlighting the charitable work

Note: Any donations received for the Mayor’s Charities as is customary will be held and split between all the charities that have applied to be involved in the Mayor’s initiative at the end of the Municipal year. 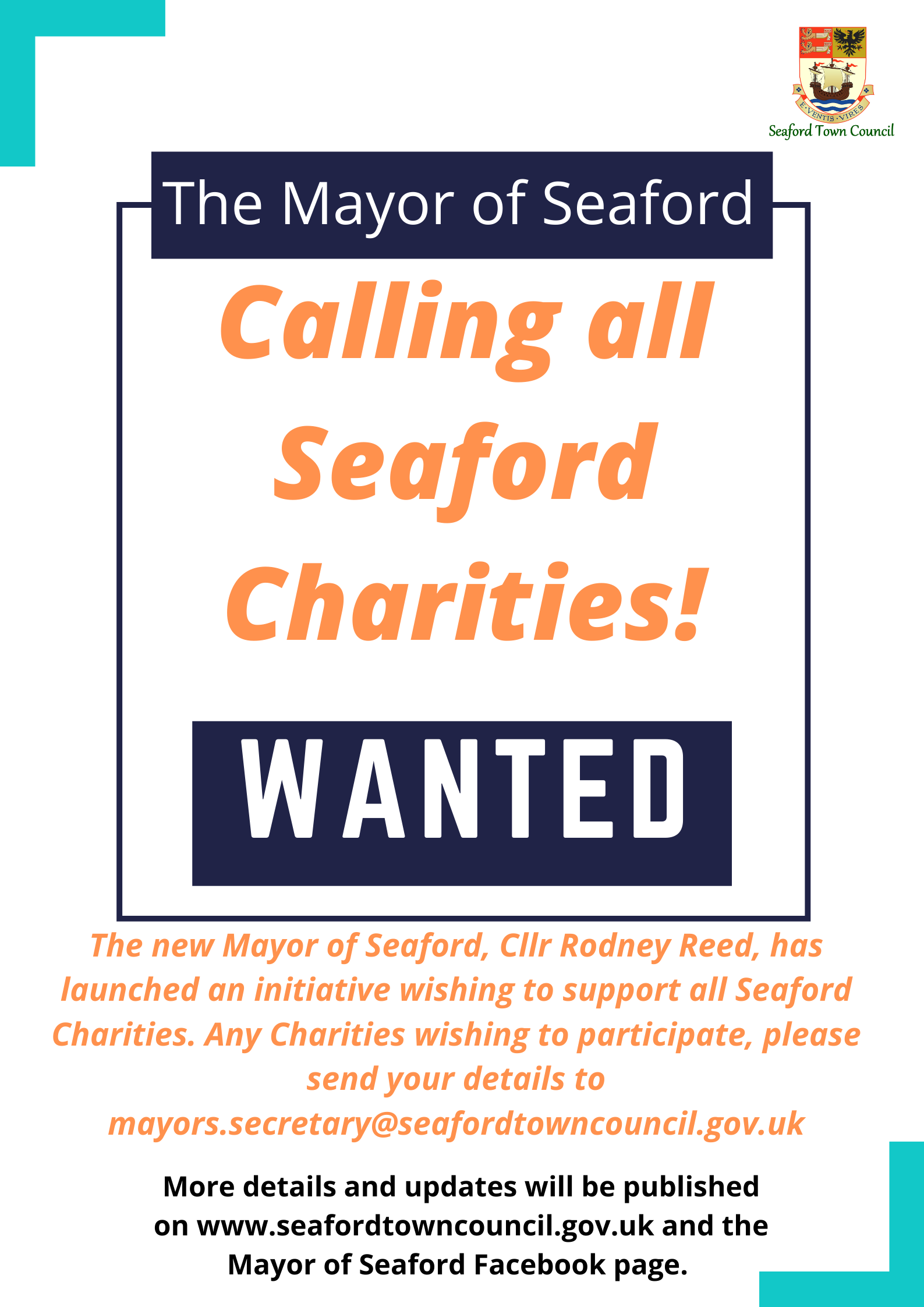