The Mayor of Seaford hosting the Civic Service 2021

The Mayor of Seaford hosting the Annual Civic Service 2021 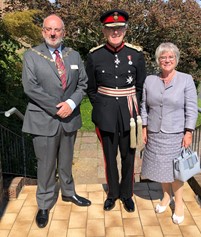 SEAFORD, 4TH AUGUST 2021 - The Mayor of Seaford, Cllr Rodney Reed, officially celebrated his induction as the 2021-2022 Mayor at a Civic Service that was hosted by Seaford Baptist Church on Saturday 31st July. Many distinguished local dignitaries, representatives from local charities and members of the public were able to attend and support the Mayor’s first official event of the year.

The service was led by the Mayor’s Chaplain and Minister of Seaford Baptist Church, the Rev’d Andy Machin. Thankfully, as restrictions had been lifted, the venue allowed for a larger congregation to attend but still had Covid safety measures in place.

The Service included: Prayers of Thanksgiving; a Reading by Freeman of the Town, Mr Laurie Holland; an interview with Julia Hancock, Chair of Trustees of the Youth Counselling Project, and; a Mayor’s Address. A Cornish cream tea was served afterwards in the Church Hall.

The event was very well attended by regional and local dignitaries. In attendance were: the Lord Lieutenant and his wife, Sir Peter Field and Lady Field; The High Sheriff, Mr Miles Jenner and Mrs Jenner; Freemen of the Town, Mr Laurie Holland, Mr Keith Blackburn and his wife; The Serjeant at Mace, Mr Peter White; Seaford Young Mayor, Joe Lacey, and Deputy Young Mayor, Erin Franklin; the Chair of East Sussex County Council, Cllr Pragnell; the Chair of Lewes District Council, Cllr Christine Brett; the Mayor of Brighton, Cllr Alan Robins; the Mayor of Eastbourne, Cllr Pat Rodohan; the Deputy Mayor of Peacehaven, Cllr Gloria Hill;  the Mayor of Newhaven, Cllr Lesley Boniface, and; the Mayor of Hailsham, and the Lady Mayoress Cllr Paul Holbrook.  Other guests included representatives of the emergency services, local service organisations and local charity representatives from the Mayor’s Charity Initiative and members of the public.

The Mayor is quoted as saying - “Many of the congregation commented to me how they appreciated being together and their enjoyment of the freedom to sing aloud traditional hymns and modern songs.   Our Civic Service was one of the final engagements for the Lord Lieutenant and one of the first for the High Sheriff. The Service was well supported by Chairs and Mayors of neighbouring towns, parishes and local authorities and by service organisations and charities in the town. The Revd. Andy Machin, Mayor's Chaplain shared a thought-provoking Reflection on peace and security overcoming fear and distress. I took the opportunity in my Mayor's Address to highlight several of my themes for the year:- ‘Stronger Together'; the individual choices that can be made protect our environment and the ‘MayorsCharities Initiative’. Andy Machin interviewed Julia Hancock, Chair of Trustees of The Youth Counselling Project who spoke movingly about their work. Her charity had been nominated by the Church to receive the retiring offering. My thanks are due to the ladies of the Seaford Inner Wheel Club who served an excellent Cornish Cream tea. This was made possible by the generous donation of their products to Seaford Baptist Church by Morrisons of Seaford and Rodda’s of Cornwall. I was delighted that the lively Service followed by a Cornish Cream Tea resulted in a happy buzz of conversation around the tea tables and in friendships renewed.”

With thanks to the generosity of the congregation, a retiring collection of £389 was collected for The Youth Counselling Project.

More photographs from the day can be found on The Mayor of Seaford’s Facebook page. 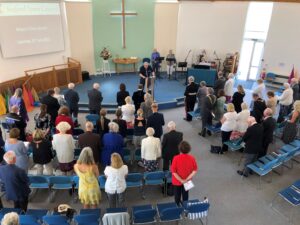 East Sussex Fire and Rescue's prompt action meant the fire was contained to a small area of bank, and public safety was ensured at all times.