Again this year, Seaford Town Council, the Seahaven Branch of The Royal Society of St George (RSSG) and The Royal British Legion as a joint committee, arranged the Veterans and Armed Forces Day on Saturday 29th June at the Martello Fields, Seaford for the whole of the District of Lewes with surrounding towns and villages.

This year the parade was organised to march through the town down to the Martello Fields, and what a spectacle it was! It was a great success with Veterans, Standard Bearers and Cadets all being led by the Surrey and Sussex Drum and Bugle Band.

Thank you to the local businesses that made the effort to decorate their windows to mark the occasion too, which added to the atmosphere!

The inspecting officer was Mr David Allam DL. He took the salute accompanied by Cllr Nazish Adil, Mayor of Seaford, Mrs Violet Hancock, High Sheriff and Mr Steve Saunders, Vice President of the Seahaven Branch RSSG. The event was commanded by Major Bob Peedle MBE, Chairman Seahaven Branch RSSG and of the Joint Committee. The Parade was under the command of Kevin Sawyer, a Royal British Legion Parade Marshal. For the Inspection the General Salute, Last Post and Reveille were all sounded by a Trumpeters from the Seaford Silver Band under the leadership of former Royal Tank Regiment bandsman, Christopher Goodchild.

The weather was superb again this year! The event started at 11am and closed soon after 2pm, during which time many people visited to witness the parade, see the stalls and the arena events. A great attraction were the veteran military vehicles on display alongside the arena.

Up front expenses for the day were met by grants from Newhaven Town Council, Peacehaven Town Council and the House Project Centre (Peacehaven). Surplus monies after the event are being given to the Forces Charity ‘The Royal British Legion’. Once again, the Joint Committee extend their grateful thanks to all those who took part and everyone from RSSG and Seaford Town Council who turned up to help with the event. Car parking was in the hands of the Newhaven Station of the National Coastwatch Institute and safety marshals for the parade came from the Seaford Bonfire Society. Event management was again in the expert hands of Adam Briggs and his team from SEL events. Refreshments for the Veterans and VIPs were provided by Seahaven Branch RSSG. Supplementing refreshments was the Seaford Martello Rotary Club’s Tavern in the Tent where Veterans on parade received their first drink free.

This year not only were members of the Royal British Legion Seaford Branch and other local branches present, but we welcomed veterans from elsewhere. Veterans from all services were present, Royal Navy, including Royal Marines, Army, the RAF and the Merchant Navy. TOMMY was again guarding the entrance to the Arena on the Day. The only sadness was the absence for the first time of the RAF Cadets on parade, whose Squadron at Newhaven closed over a year ago.

A COMMEMORATIVE BENCH has also been recently installed at the War Memorial to coincide with Veterans and Armed Forces Day. This was officially unveiled by the Seaford Mayor Cllr Nazish Adil and many other local dignitaries.

Cllr Nazish Adil said:
“What a great way and an excellent day to commemorate the services, sacrifices and dedications of the ones standing and remembering the ones fallen on the D-Day!
It had been a great yet emotional time. Everyone on the stand had goose bumps and teary eyes while they were marching past.
Appreciate and highly honour the Armed Forces. They are the backbone of our country and it is because of them that we breathe in a secure, free and sovereign air.
Congratulate each and every one on the team for their efforts and enthusiasm. It had been well organised, and I thank the veterans, delegates and the members of the public who attended it and joined us.”

Chairman and Event Commander, Major Bob Peedle MBE said:
“Any concerns before the event were soon dispelled on the day. It was a magnificent affair and I was so proud and thankful of all those who contributed to its success. It is truly a community event supported by so many organisations and individuals.” 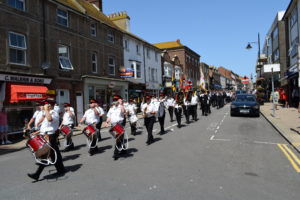 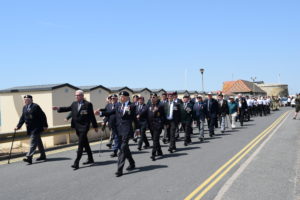 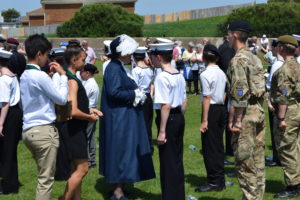 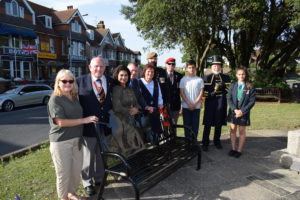 Proposed Development on A259 within Seaford - Town Council Needs Your Comments

At the ‘Support our Seaford Charities Event’ on 5th September, three lucky charities will be chosen in the prize draw to split the Mayor’s funds raised!